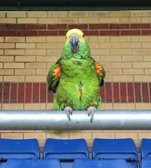 Baldock opened brightly and started with their usual passing game but it took a while before they had a decent chance on goal. Furness put a fantastic cross field ball over the last defender on the right for Decker who put in a good cross but the Keeper punched it away. In 20 minutes Wembley had the ball in the net only for it to be called back for offside.Franklin and Decker were working well on the right with Decker getting to the line and winning a number of corners. In 24 mins Baldock got the opener with a cracking goal from Rome who decided to half a shot from about 30 yards. This wasn’t an opportunistic thing to catch out the Keeper because it went in like a rocket. The Keeper never moved and the crowd were stunned for a second because they hadn’t realised it was in either. On the left side the ever industrious Hay was working with Burton and causing some trouble for the Wembley defence when Hay put in a deep cross for Decker who got in his shot in and had a good shout for a penalty. Baldock were stretching Wembley all over the place and trying to find gaps on either wing with Furness constantly switching play. Just before the break Piggott was on a run but was pulled down just outside the box. Joy took the kick and put it just over.
Baldock 1-0 at half time.
Baldock continued with the same tactics in the second half and Wembley were getting more and more frustrated with the lack of possession. Rome was running the show with Hay looking very bright all game. The best chance of the half fell to Reynolds after Rome got to the line and cut it back, but he couldn’t quite sort out his feet. Wembley ended up losing the place a bit and were constantly after the Referee for decisions they were never going to get. The visiting Parrot (don’t know why it was there) had learned only one word from them by the end of the game and I am sure it was shouting ‘Ref, Ref’.
Team; A.Harpur, L.Franklin, B.Burton, A.Coppin, J.Furness, L.Rowland, A.Gaffney, C.Rome, S.Piggott, Z.Decker, A.Hay. Subs; C.Joy, D.Harper, Tommy Reynolds, J.Hewitt, D.Doolan
Share via
FacebookTwitter
https://www.baldocktownfc.com/
Recent news