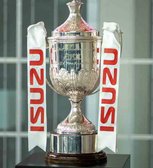 A great day for a Cup game but not one I was looking forward to given recent results.
Ipswich started brightly and their forward line looked lively and they scored in 7 mins. Not a great start for us as we looked decidedly shaky. It got worse 5 mins later when they got their second. I was thinking that this could be the start of a cricket score but Reynolds scored with a header from a corner a minute later to make it 2-1. I did think that the Ipswich defence didn’t look too inspiring either but we weren’t testing them too much.
The Referee then added to the excitement by chipping in with a penalty decision for the visitors, which they duly scored. It definitely wasn’t a clear cut penalty for me and I would not have given it, strangely enough.
3-1 down at half time and it looked beyond us but Ajong scrambled a goal at the back post in 47 mins and again demonstrated the fragility of the Ipswich defence.
Back in it now - we might have a chance here.
In 54 mins the Ref intervened again by sending off an Ipswich central defender after what I thought was a 50/50 challenge with Ajong but the Ref knows best and off he went. This was the guy who was holding the Ipswich defence together. Ajong was injured in this challenge and seemed to be limping.
It didn’t seem to hamper him too much as he managed to get the equaliser three minutes later in 54 mins.
This was a different Baldock team now as they had found confidence in their endeavours and looked the better team.
Ajong continued to chase everything and generally was a thorn in the Ipswich side. Archer, in goal for us, looked solid and had pulled off some excellent saves earlier on.
Baldock had some really close efforts, shots and headers, and could have gone a couple in front but, finally, in 85 minutes Switters was in the right place on the penalty spot as the Keeper saved and pushed the ball out towards him and he blasted it into the back of the net to make it 4-3 - when I say the crowd went wild it was un understatement - they went wild, the Baldock part of the crowd at least.
Ipswich then decided to have a go and in a two minute period Archer had pulled off an excellent save, the ball was cleared off the line a couple of times and they hit the post. Baldock were definitely giving everything to hold out and they battled to the end for a fine 4-3 win.
It was one of those great games that really gets everyone going.
Archer was excellent but I would give Man of the Match to Ajong, aka Boomer, who got his two goals but epitomised the spirit of the team by battling throughout despite having an obvious injury.
A win that we can build on and sets us up nicely for an away tie with Long Melford next month.
Share via
FacebookTwitter
https://www.baldocktownfc.com/
Recent news