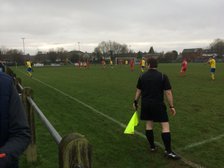 Spectacular Morris double gets Town back on track

Two goal of the season contenders from Freddie Morris and an Anthony James penalty gave Baldock Town a 3-2 win at Winslow United on Saturday.

Following Monday’s defeat to Harpenden, manager Luke Gregson made four changes to his starting line-up. With Sam Perrin injured and skipper Jack Gregson out through illness, in came Adam Pitcairn and Michael King. Top scorer Anthony James returned to the starting line up with Josh Furness dropping to the bench. Jack Farmer also returned in goal.

A lively, end-to-end opening to the game saw chances traded early on. Winslow seized one of theirs to edge in front on 9 minutes. A teasing ball to the far post had the Reds defence scrambling. The move was kept alive and the ball was pulled back to a home midfielder who guided the ball home from 8 yards.

Baldock were grateful to the returning Farmer a couple of minutes later when another good move brought an excellent diving save following a well-struck volley from just inside the box.

At the other end, a good cross from Luke Gregson to the far post had the keeper struggling to claim the ball and Holland’s close range strike was well-blocked.

Town really started to hit their stride and popped the ball around well on a soft and greasy surface. From one fine move, a good cross from Charlie Payne found Anthony James all alone in the box and his header came back off the post.

It was beginning to look like a matter of time before the visitors levelled and they did so on the half hour in spectacular fashion. Freddie Morris linked well with Hitchin loanee Michael King down the right-hand side. After a neat give and go, Morris controlled superbly and hit an unstoppable dipping volley over the keeper and into the net from 18 yards.

Despite Town getting on top as the half wore on, Winslow remained a threat on the counter attack. Farmer was once again called upon with a great double save from close range. They would prove all the more valuable when Town were awarded a penalty right on half time.

Another intricate move saw Gregson slip the ball into the path of Charlie Payne in the box and he was unceremoniously brought down. Anthony James stepped up and you probably won’t see many better penalties than his as he slid the ball low, firm and in off the post for his 33rd of the campaign.

The second half didn’t quite have the verve of the first, but Baldock continued to have their chances and largely controlled proceedings as all players looked to be feeling the effects of a heavy pitch.

Morris once again had his shooting boots on with a stinging drive forcing a good save from the keeper. Michael King’s cross shaved the frame of the goal, whilst Anthony James also tested the reflexes of the Winslow stopper.

The home side were a threat from set-pieces all afternoon and they should’ve done better 15 minutes from time when a corner to the far post was headed over the bar. Harry Holland and Anthony James went close again before Freddie Morris popped up with another beauty eight minutes from time.

Winslow were taking chances with time running out and Baldock were able to exploit the space in behind. A ball in to substitute Luke Hennessey was neatly set back to the edge of the area and Morris curled a classy 25-yard finish in off the underside of the bar.

The Reds two-goal advantage lasted less than two minutes as Winslow scored a cracker of their own. A neat run off the left-hand side, so the home wide player cut in and thump an excellent right-footed effort into the corner. It was a nervy finish for the visitors having controlled the game for much of the second half, but they saw it through to clock up three more points.

Coming up over the next week they have two home games. On Tuesday night, they entertain Premier Division leaders London Colney in the last 16 of the League Challenge Trophy – 7.45pm KO. Then on Saturday Kensington Borough visit Roker Park in the league – 3pm KO.

Player of the match