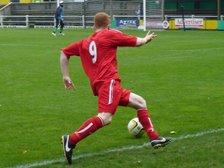 Nathan Aulsberry scored twice as Baldock Town progressed to the next round of the FA Vase with a comfortable 4-1 win over Sporting Bengal United.

After a good start to the league season, Baldock turned their interests to the First Qualifying Round of the FA Vase against opponents from the Essex Senior League, which is equivalent to Step 5 (one level above ourselves).

The first half began fairly evenly, but it wasn't long before Baldock took control and after 14 minutes Jack Gregson’s shot just fizzed past the right hand post. Baldock were exerting lots of pressure and after 24 minutes Nathan Aulsberry was one on one with the keeper, but his effort rebounded for Lee Pateman to put the follow up wide.

Pressure was definitely building and after 29 minutes Josh Furness’ wicked drive was parried by the keeper, only for Aulsberry’s nightmare in front of goal to continue, where he missed the target with an open goal gaping.

Entering the final ten minutes of the half, the Reds upped their game even more and after 34 minutes a left wing cross from Jack Gregson beat the keeper and left Tom Oram with a simple tap into an empty net for the 1st goal.

Three minutes later, a left wing corner from Lewis Barker was expertly despatched into the top right hand corner of the net with glancing header from Aulsberry. Into stoppage time and Jack Gregson scored arguably the best goal of the game when he ran onto a through ball from Oram to beat the keeper and slot into an empty net.

Half time came with an impressive three-goal advantage for the Reds. Indeed the goal tally could and maybe should have been better as the Reds didn’t take the host of chances they created.

The second half saw the visitors come out in a much more determined frame of mind taking the match to the Reds, but Baldock defended their half time lead resolutely with both skipper Dean Gilbert and Michael Payne dealing with the aerial onslaught.

With just over an hour gone, Baldock increased their lead when Sean Morrison played a ball through the middle of the Sporting defence for Nathan Aulsberry to run onto to score his second of the afternoon and Town’s fourth.

Despite the game more or less being over, the opposition didn’t give up and Nicky Stilwell had to make two or three outstanding saves in the latter stages of the game. With just under 15 minutes remaining, the visitors got their rewards with a fine effort from their Colombian forward Javier Raviera when he side footed home from about 12 yards.

There were no further additions to the scoreline, so Town march through to the Second Qualifying Round of the FA Vase when they will be at home to Long Melford on Saturday 4th October.

Next up for the Reds is the visit of Stony Stratford Town to Top Field on Wednesday evening – 7.45pm KO.