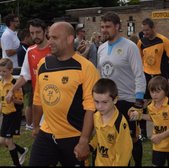 Rob will be a familiar face to the Baldock Town faithful as he came on board mid-November last year as Assistant Manager and played an important role in our change in fortunes on the pitch; his coaching experience and network of players were pivotal to our turnaround.
A former professional footballer for Colchester United, Rob is a UEFA qualified coach who is well known to the Spartan South Midlands Leagues having previously managed both Langford FC and Stotfold FC.
He has a proven track record of developing young talent and progressing them into the First Team which he did successfully at Stotfold FC with his u18s side, before taking the first team manager’s job shortly afterwards where he promoted their young talent.
Rob’s history of youth progression and creating opportunity will bode well for Baldock Town following the April announcement of our new EJA sides from u13 through to u18.
Rob has wasted no time in securing his backroom team for the 2020-21 season; he has retained the services of Goalkeeper Coach Stuart Howard and Team Physio India Bunnage who both completed the 2019-20 season at Baldock Town.
We would like to welcome back Ercan “Surge” Mehmet as Assistant Manager; Surge was our goalkeeper coach last season before leaving to join Welwyn Garden City in December.
He is an outfield and goalkeeper coach with experience playing and coaching in Malta, Gibraltar and more locally at Hadley FC.
Unfortunately, Rob Verdia has decided to stand down as first team coach to pursue a new opportunity; we’d like to thank Rob for his efforts during his short time with us and we wish him the best of luck.
We would also like to welcome back Danny Hutchins as First Team Coach; Danny started last season as our first team coach before leaving to take a role at Hayes & Yeading in November - he did keep ties with the club as he coaches the Baldock Town Academy sides.
He is former professional footballer for Tottenham Hotspur and Yeovil Town who now divides his time between coaching and working for Crystal Palace FC as an Academy Scout.
We caught up with the new Manager Rob today regarding his appointment:
“I’m delighted that the Chairman has offered me the opportunity to manage Baldock Town FC. It’s a fantastic club with so much potential, especially with the new stadium on the horizon. My management team of Surge, Hutch, Stu and India will bring the professionalism and experience needed to take the club forward. We have a great bunch of lads who are honest, hardworking and want to win. The youth teams have some fantastic young talent who I’m already keeping a close eye on to promote to the first team when ready; 4 of the newly formed u18 side have already joined the first team in training and have demonstrated they can more than hold their own. I’m looking forward to the challenge ahead and can’t wait to get going!”
Our Chairman Graham Kingham had this to say about this new era at the club:
“Having consulted with my fellow committee members and a number of senior players, it was unanimously agreed that we had the ready-made replacement already at the club in Rob. Rob joined us at a very tough time last season with us just above the relegation zone. Alongside Adam he was instrumental in us winning nine straight league games taking us to the safety of mid-table. If the season had not been cut short, I am sure we would have finished in the top ten.
I would also like to welcome back Surge and Hutch as Assistant Manager and 1st Team Coach respectively, both of whom the players and I hold in very high regard. Rob has put together a strong team that will allow the players to do what they do best on the pitch and entertain the fans.
I am really looking forward to the new season, when it starts, and have a feeling that this may well be a successful one!”.
Share via
FacebookTwitter
https://www.baldocktownfc.com/
Recent news