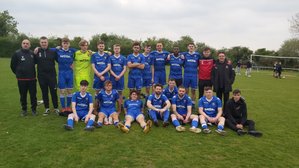 Baldock take the League decision to the last game but lose 2-1 in a hard fought match. Sooo close.

This match was effectively a Cup Final and Winner takes all, the weather was decent but the pitch was awful, very bumpy and hard. Not a pitch for a team wanting to play football. There was a fair breeze and Baldock were playing against it. There was a decent crown gathered for this one.

Lemsford had the first chance in 5 mins when Baldock committed a daft foul 20 yards out. Archer. Returning from 1st Team duty, was in goal and produced a tremendous save low to his left from a great shot. In 15 mins Lemsford were through on goal, the Lino (Hewitt, a Baldock Sub) gave offside, and he was right, but the Ref over-ruled it. This meant that Isles was committed to a flying tackle to recover the situation, it was a foul and a free kick in the same place as the last time. Isles was booked for the tackle. We knew that Lemsford were good with their free kicks and this was another good one but Archer was again up to the task with another save that was better than the first.
Baldock were losing the midfield battle and were under real pressure at this time but were holding out, just!
In 28 mins Lemsford had the ball in the net but Lino Hewitt was spot on again with an offside decision, the Referee agreed with him this time so it was chalked off. Hewitt is a brave man but just as well he was on opposite side from the Lemsford support as it could have turned nasty there.
The Baldock defence were under considerable pressure during the first half but they were coping with the challenge. Yearwood and Aka were doing their best with the high balls coming their way but didn’t really test the Lemsford Keeper until 45 mins when Pride won the ball on the right, passed to Marra who slipped the ball through for Yearwood who got a shot on target from about eight yards but the Keeper was in the right place. That was the last kick of the ball and Baldock were still in it with Archer (and Hewitt) keeping them in the game.

I don’t know what was said at half time but Baldock were a different team right from the start. In 52 mins Marra won the ball in his own half and found Matsukatou in the oppositions half, he made some progress but was fouled thirty yards out on the left. Marra took the kick and hit the bar with a high looping shot, or was it a cross gone astray, Marra will no dobt claim a shot. The tall Lemsford keeper wasn’t sure either and so he just left it. A couple of minutes later Matsukatou was on the charge down the left again and managed a cross in for Yearwood but the ball was cleared for a corner from his shot. The resulting corner went in on top of the Keeper who looked lost again, the ball broke for Tyler who spun and got a shot off from close range but the ball was cleared.
Lemsford were definitely vulnerable at corners and Baldock were applying the pressure that they couldn’t manage in the first half. In 56 mins another cross ball was cleared out to about 22 yards on to the right but Yearwood was there, he collected it and launched a low shot from that distance that beat the Keeper to his left.
Baldock 1-0 up and the crowd went wild, great goal.
Just a few minutes after the goal Tomlin had a good run and shot that pulled out a good save from the Keeper.
Aka then had a great run along the sideline and made the byline where, lacking support, he cut inside and then went along the by line and got in a shot which the keeper saved.
In 63 mins Yearwood was again in action when he won the ball on the left, cut inside and had a shot from 20 yards which Platt, who had come on, managed to get a foot to and it went just wide.
Baldock were a different team and were well on top in this match.
The next chance came in 75 mins when Fantom slipped the ball through to Matsukatou on the left who got in a cross and found Aka who managed to knock it towards goal but the Lemsford Keeper collected.
Just after that Baldock gave away a penalty, not sure if it was, but Archer had collided with a defender. The Ref had delayed quite a few seconds to consider it and it looked like he wasn’t going to give it but he did. Lemsford scored from the spot to make it 1-1.
This effectively turned the game and gave Lemsford hope where they had seemed out of it up until now.
In 84 mins Lemsford got their second goal with what was an easy header from close in. 2-1 to Lemsford.
Baldock were unable to recover from that and the game played out with no more goals.

Baldock were excellent in the second half and will no doubt be disappointed to lose this match. It did seem like a cup final but this was the last match at the end of a long season where the Reserves had supplied many players to the 1st team throughout the season and like many other teams struggled against the CV pandemic at the start of the season. A lot to be proud of as promotion was secured with a very young team in an Adult league.

J.Graham (BTFC fan) – the view expressed is my own and independent of the Club